With great progress, much work remains for breast cancer treatment

Breast cancers driven by the hormones estrogen (ER+) and progesterone typically respond well to tamoxifen, a drug developed and approved in the 1980’s that blocks the estrogen signal.  Since that time new classes of drugs to target ER+ tumors have been developed including other inhibitors of the estrogen signal and aromatase inhibitors that block the formation of estrogen.  These drugs often are prescribed for 5 to 10 years, or more, and work to control the cancer cells or keep them from growing.  However, resistance to anti-estrogen therapy can develop in some patients, and the cancer returns, and/or spreads to other parts of the body. Thus, new treatments have been recently developed including therapies targeting CDK4/CDK6 in cancer cells that are used in combination with anti-estrogen drugs, but additional treatments are needed to overcome drug resistant cancer cells.

Breast cancers driven by mutations, or multiple copies, of the HER2 gene are typically fast growing and were very difficult to treat until a drug – called Herceptin™ (trastuzumab) – was approved by the FDA in 1998.  Additional HER2 targeted therapies were approved over the following decade. Today, HER2 targeted therapies are effective at controlling most HER2 tumors for a very long time.  However, like the ER+ tumors, the HER2 tumors can become resistant to treatment and new options are needed.

Triple-negative breast cancer is a type of breast cancer that is not fueled by ER, PR or HER2 (thus, triple negative).  And there are currently no targeted therapies for this type of breast cancer.  Thus, treatment options for TNBC are typically surgery, radiation and chemotherapy. Some triple-negative breast cancers respond well to chemotherapy. However, TNBC that do not respond to chemotherapy can be aggressive, spread quickly, and be deadly. Many TNBC are defective in DNA repair, making them good candidates for drugs that cause DNA damage such as platinum-based drugs or PARP inhibitors.  Understanding which patients will likely benefit from these therapies is an active area of research, but the development of new, targeted therapies for TNBC is also an urgent need. 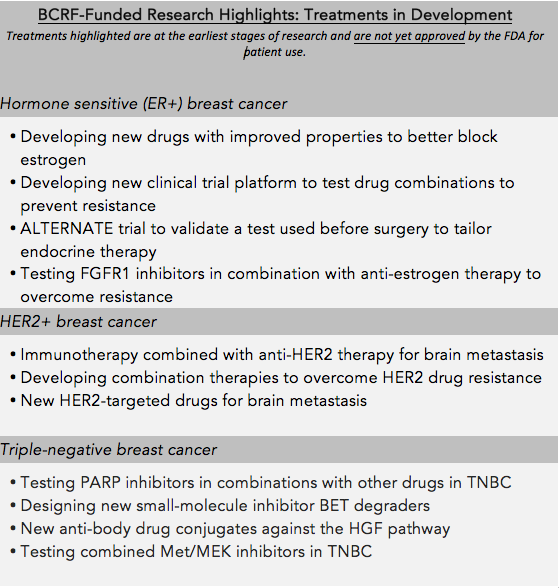 As previously reported, BCRF also funds a vast array of immuno-oncology studies totaling more than $6.5 million this year. These studies include research in cancer vaccines, immune checkpoint inhibitors and adoptive cell therapy. In addition, this past February BCRF announced its new Drug Research Collaborative, a first-of-its kind program supported initially by Pfizer. The new program links the creativity and ingenuity of academic scientists with a robust pipeline of 16 oncology drugs in development and provides $15-million in new funds for research, with an emphasis on metastatic breast cancer.

The treatments discussed are only examples of research funded by BCRF and not the entire grant portfolio. The treatments highlighted are at the earliest stages of research and are not yet approved by the FDA for patient use. These ideas are being tested in laboratory models by BCRF-funded scientists. Some will soon enter clinical trials. Only after the new drugs advance through a series of clinical trials, (Phase I, Phase 2 and Phase 3) will we know whether a drug will be effective for patients. These projects exemplify the scope of BCRF’s investments to make new treatments available to patients with breast cancer, especially those with metastatic disease.