After his wife was diagnosed with breast cancer, Mike Werb turned to his hobby to raise funds for research

In February, Mike Werb and his wife Jaclyn had just welcomed their two-month-old son into the world when their lives turned upside down. Jaclyn, 29, was breastfeeding Luke when she discovered a lump on her breast. Immediately she contacted her doctor and was later diagnosed with breast cancer.

“I have always believed that everything happens for a reason and to try and learn from every experience and life event,” Mike, 34, from Toronto told BCRF. “As a father and husband, my dream job, not being able to ‘fix’ my wife’s diagnosis was the hardest for me to deal with.”

Feeling helpless against the disease that he had no control over, Mike turned to his hobby – watch collecting – something that his in-laws unintentionally instilled in him when they gifted him his first real timepiece for his engagement six years ago. He decided to join forces with the watch strap company Crown and Buckle to design and sell pink watchstraps dubbed #Straps4ACure.

“To me watches are a form of art, especially mechanical timepieces and other than my wedding ring, the only jewelry or accessory I’ll always wear,” Mike said. “We don’t have an infinite amount of time on this planet, so wearing a watch is a constant reminder to live life to the fullest!”

He shared his wife’s story and the item with the Instagram watch community and the response was astounding. 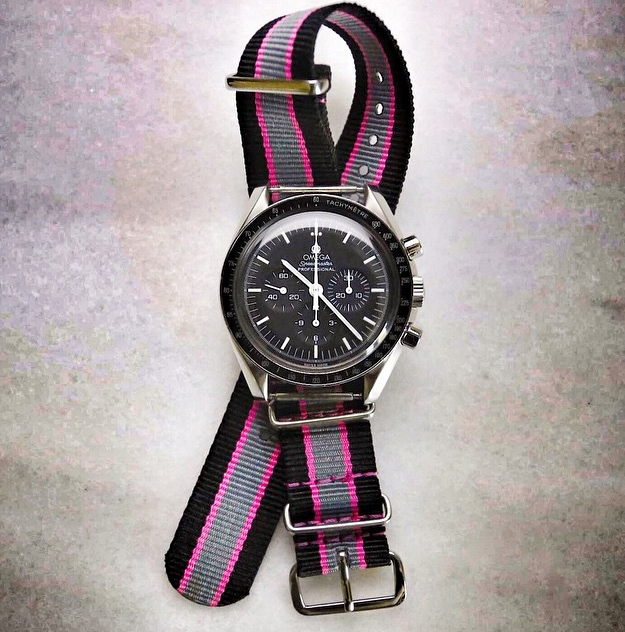 The first batch of 200 straps sold out in days. The sale, which included an online auction, raised nearly $5,000 for BCRF. While buyers wait for the second batch of straps to go on sale, supporters have continued to find creative ways to raise funds for BCRF. In one case, a user donated $1 for every “like” received on a photo of the #Straps4ACure watchstrap raising the fundraising amount to nearly $6,000. That event took place on Jaclyn’s last day of chemotherapy.

“The online support has been outstanding,” Mike said. “To have strangers send their wishes and tell their stories has given us the strength to push forward and battle this terrible disease.”

While close family and friends have pitched in by sending meals, Mike said the online watch community has shared more than 400 photos of the #Straps4ACure watchstraps along with personal stories on how cancer has affected them. One woman even knit Jaclyn a blanket to take with her to chemo.

“Seeing the support the past few months has cemented the fact that although the community may live all over the world, and may never really know each other’s true identities, we are truly a family!” Mike said adding that he hopes his initiative will help other families in similar situations to his own.

“We all know someone that has been affected by breast cancer. With someone being diagnosed almost every two minutes, we need to do what we can to help spread the word and find a cure,” he said.