Research conferences are great opportunities to present new and emerging ideas, and the 2017 AACR Annual Meeting was no exception. In addition to sessions and posters presentations on basic research, there were also a few that demonstrated new technologies that may help in the fight against cancer. Here we focus on just two of those: liquid biopsies and artificial intelligence. 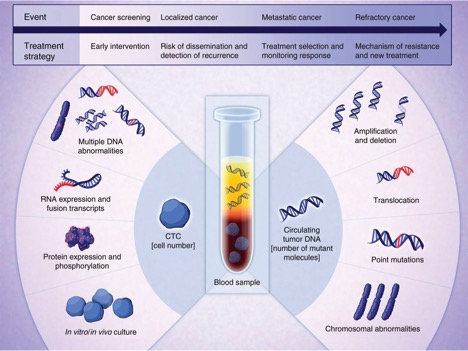 We’ve been hearing about liquid biopsies for some time now. The idea is fairly simple: can we use a blood sample to tell us about a cancer or disease instead of taking a tumor biopsy? This is possible because tumors cells can be found in a patient’s blood (known as Circulating Tumor Cells, CTCs). In addition, DNA from the cancer cells may also be found in the blood (cell free DNA, cfDNA). New technologies like Next-Generation Sequencing (NGS) and digital droplet PCR (ddPCR) can detect and analyze these CTCs and cfDNA to tell us details about the tumor.

Some of the advantages to liquid biopsies are obvious like avoiding the need for a surgery to get the tumor biopsy. Another advantage discussed at the AACR Annual Meeting was the difference in the time it takes to receive results. From the time it takes for a physician to order a tumor biopsy to sending samples for analysis, and receiving results– the process can take weeks. In contrast, a liquid or blood biopsy takes  just a few days. Those few days may be critical depending on the cancer to start therapy. Liquid can also be taken more frequently, giving a look at the evolution of the cancer in real time and the response to treatments.

Some of the disadvantages to liquid biopsies have to do with the amount of circulating tumor cells and cfDNA present in the blood. There may only be 1-10 CTCs per mL of whole blood. With a few million white blood cells or the billion red blood cells per 1 mL of blood the difficulty in isolating and analyzing these CTCs becomes clear. Even as technological developments make it possible to detect a single CTC, the low abundance is still problematic. For example, even for hormone receptor positive breast cancer we know that not every cell will have hormone receptors expressed. If the few CTCs detected happen to not have hormone receptors, this may be diagnosed incorrectly. Similarly, there are different methods to count and analyze the CTCs and cfDNA. If a single sample of blood is split to use two different methods, they may give different results if all the CTCs and cfDNA happened to go to one tube.

While artificial intelligence may be responsible for a new generation of self-driving cars, the technology is also making its way into research labs.

One example presented by Lynda Chin, from MD Anderson, was a tool known as the Oncology Expert Advisor, developed with IBM’s Watson. The computer system was developed and programmed similar to how a physician would be trained. It was given literature and guidelines to start. Then it was given patient cases and it predicted treatments. These were then corrected or modified by medical experts. This process was repeated and the computer began to “learn” with each case. The system was designed to mimic the interaction between a general physician and a specialist, so physicians can access the Oncology Expert Advisor to see a summary of their patient’s relevant history and recommendations based on all the information the computer has. Although Oncology Expert Advisor is no longer being developed, similar technology is used in IBM’s Watson for Oncology product developed at Memorial Sloan Kettering.

Mark DePristo from Google Research’s Brain Team discussed a similar method of teaching computers to be pathologists. The concept is the same, give the computer a “teaching” set of images and tell it what they are – pictures of a cat, for example. Eventually, the computer teaches itself what to look for and can recognize which images are cats, and which ones are not. Since 2011 computers have been getting better and better at these tasks and recently have started to surpass humans. This is largely due to the fact that humans get tired and make mistakes. This can be compounded in pathology, when pathologists don’t have the time or ability to look at an entire slide from a sample. So instead, they are trained to look at certain areas to get a representative view of the sample. A computer, however, can be taught what looks like a cancer, look at the entire slide and identify areas that may be abnormal or cancerous much faster and more accurately than a human. 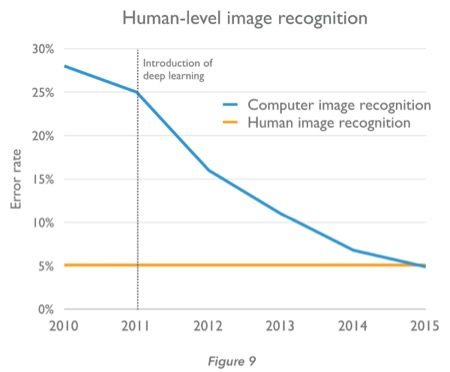 Artificial intelligence in the lab doesn’t mean specialists or pathologists will be replaced by computers. For pathologists in particular, it does mean their role in cancer care and diagnosis may shift. Rather than spending their time in identifying cancer cells on a slide, they may be confirming or rejecting what a computer has already found and then making decisions on whether or not it warrants treatment or watching. The growing use of AI in cancer care is a field that needs much more study. Several papers have shown that we can use computers to read pathology slides with great precision and accuracy, but we need to understand better how this technology fits in to the current diagnostic paradigm. Siddhatha Mukherjee, author of The Emperor of All Maladies, takes a closer look at this particular issue in a recent article in the the New Yorker.