By using hot sauce and a whole lot of teamwork, Tijuana Flats is supporting research in a big way.

How does a small Tex-Mex restaurant end up with 100 locations in 6 states—and a philanthropic organization that’s donated more than $3 million to charity? For BCRF partner Tijuana Flats, it all dates back to the restaurant’s first year in 1995, when that first location threw a Christmas party for 25 local Head Start students.

“We made it a priority to be involved in the community since day one,” said Ben Kuykendall, Senior Philanthropy Manager of the Just In Queso Foundation, Tijuana Flats’ charitable organization. “It wasn’t for any reason other than employees and managers wanting to make a difference.”

And what a difference they are making. Tijuana Flats, through Just In Queso, has donated more than $479,000 toward breast cancer research since teaming up with BCRF in 2007.

“We never say, ‘Now it’s October, we’re going to give back and help out," Kuykendall said. “We constantly give our employees opportunities to give back, and now they expect it. It’s become part of our culture.”

The opportunities that benefit BCRF come in two forms: in-store and online sales of “The Sauce That Saves BCRF Edition” and substituting pink tortillas for an extra $1 during October. Aside from the gratification employees feel from contributing to a cure, there’s an extra incentive for them to rally behind research, too. 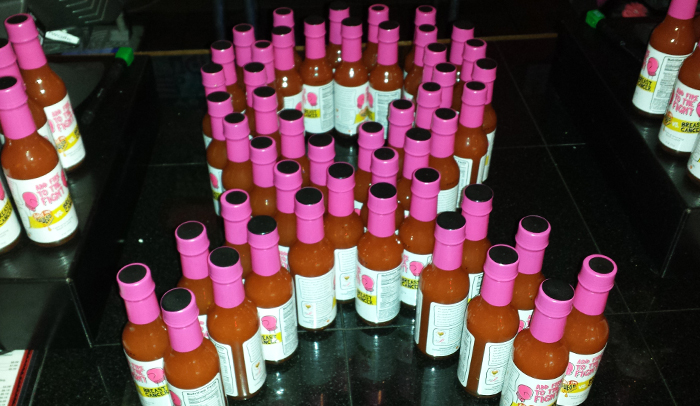 The company’s CEO announced that employees of the restaurant location that raised the most money for research during October would get the day off—and management would wait their tables instead.

“It was very motivating to our restaurant employees. When they realized the corporate team would take a whole day off, it emphasized how important this was,” Kuykendall said. They felt more connected to the cause.”

“It Became Our Mission to Sell for Cathy”

Throughout the month, restaurant managers, like Diane “Dee” Bell, encourage each location’s staff to sell the hot sauce and tortillas to patrons. When Bell heard about the competition, she relished the opportunity to rally her staff, even though she had no direct connection to the disease. It wasn’t until she shared the news about the competition with her family that her mother-in-law filled her in on a secret: she was a breast cancer survivor.

“You don’t realize how many lives you touch doing this,” Bell said. “They don’t necessarily share their stories because they think no one wants to hear it, but they’re there.”

Many of her mostly teenage staff also had personal experiences with the disease, whether it was a mother, aunt or grandmother who had battled breast cancer. Then one day, the disease hit even closer to home for Bell and her employees. A frequent customer, an older woman named Cathy, came in with her husband before undergoing a double mastectomy the next day. Unfortunately, she didn’t make it. 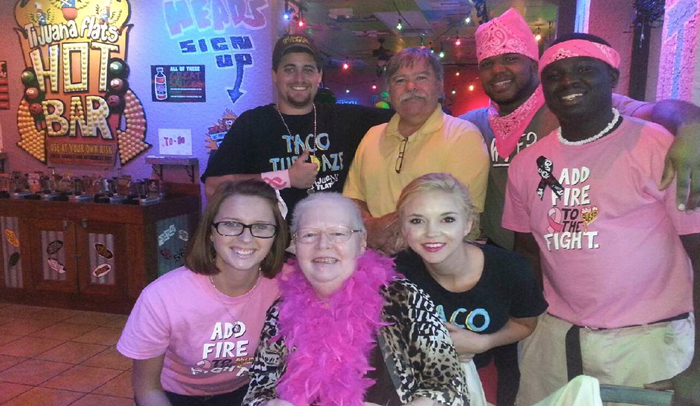 “All the kids had interacted with her and heard her story—I’ll never forget that,” Bell said. “After that, they all put in 110 percent. It became a mission for these kids to sell as many hot sauce bottles and tortillas they could for Cathy.”

Bell and her employees gave it their all during October. Her staff camped outside grocery stores on their days off to sell more bottles of hot sauce. They egged customers on to buy more. And the friendly competition between restaurant locations just pushed her employees to work harder. It paid off. Bell’s restaurant in Stuart, Fla., sold more than 1,100 bottles of hot sauce in October 2013.

“I cried when we won, “ Bell said, “I was so ecstatic for these kids. They got recognition for being so passionate.”

As the location manager, Bell was invited to join Tijuana Flats executives at BCRF’s annual Hot Pink Party in New York and present Tijuana Flats’ check to the foundation. “It’s a sense of pride to be able to present a check from such a small company,” she said.

This year, Bell is managing a restaurant in a different location, but she has no doubt her team will win again. 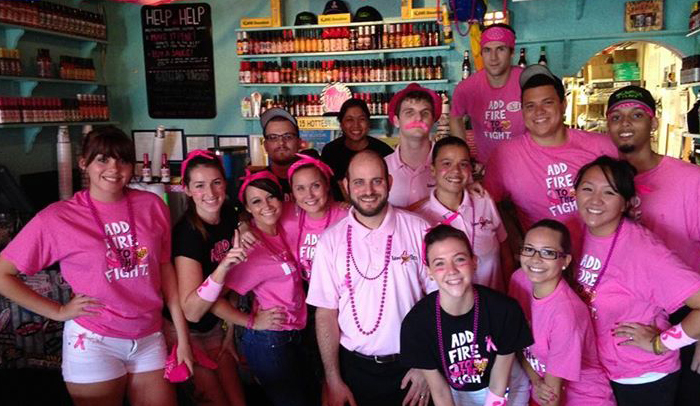 “I’m fueling the fire here!” she laughed. “I’m using my personal funds to buy little things for the girls, like headbands, ribbons and tutus, to make it a fun atmosphere.”

Already, her employees have organized a pancake breakfast at a local church and, on Oct. 21, they donated all their tips to BCRF.

“I’ve told them whatever you donate, I’ll match myself,” Bell said. “I don’t want my staff to give 100 percent if I’m not giving it too. This is a cause we don’t want thanks for—we just want to know we’re closer to a cure. Today, I’m 100 percent healthy but, tomorrow, I could be suffering from breast cancer, too. I hope people would fight that much harder for me.”